it’s been a while again 🙂 Since coming back from our holiday I really don’t feel like I’ve stopped, even when I should have been relaxing I still seem to have been doing things.

So Williams birthday was cool, we have a great meal at Pizza Express, and the boys really enjoyed it, we also had good news about Edward and school, but I’m not going to tempt fate and say anymore until it is set in stone.

On Saturday I had a craft fair, which went quite well, no one even looked at my new corsages, and no comments on them either, so that was disappointing. I think the main thing is this around here, that except for parents sorting out childrens Christmas presents, no one is buying yet, and I don’t really know why.

As always a piccie of my stall! 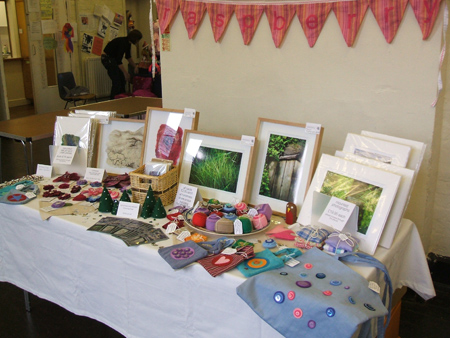 I have one more left in 2 weeks time, and from now onwards I’m really just going to be completing orders, rather than making new and different items. So if you are interested in anything you have seen on here or on Flickr, just drop me an e-mail at alice(@)raspberry(.)co(.)uk and we can sort something out.