er, well quite a descriptive factual title for a change, but you know, it is spot on!

Now considering the previous day I had been out from 4am to 8.45pm (more of that in the next few days!), I was really quite composed and organised! Not like last year!

After last years rip-off of £15 parking in central Oxford, we opted for the Park and Ride this year. We have previously used it on a trip with the boys and found it to be great, so we parked up, ready with my little wheelie box thingy, and off we went!

(no photos of this, insert your own images of this from your imagination!)

So we got there, with loads of time, and NO STRESS! result!!!!

Went in, all seemed calm, Becci looked pretty calm, not all mad like I looked at Handm@de Winchester : )

So I went about sorting out my table, 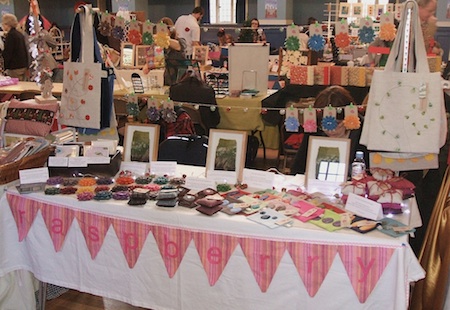 and then I went on my selling way, and rather fab it was too! I sold lots of stuff, yay! Met Johns old boss, which was lovely and someone who uses to work with John years ago! I also managed to have a look round, and saw some really lovely work, including Lilley and Lush Lampwork.

I bought some buttons from Su, three lovely blue resin hearts and a blooming lovely amigurumi brooch from Hannah Chan, when I get a chance, and some decent light I will take a photo of it : )

So it was a great day, and it was also Williams birthday which we celebrated before we left, and when we returned! While we were out he and Edward spent the day with Nana Ruth and Grandad Jim and made a birthday cake, which the boys made then William decorated! William based it on this, I would show the new version, but most of it is in our tummies now!

So roll on next years Handm@de Oxford, and I guess I need to make my mind up about Winchester next year, to do 1 or 2, what do you think!?

« a sentence » another year…