I will admit, I do have much more than just a corner, almost a whole room, even though it is the smallest room in the house, but this corner is now pretty much complete : ) 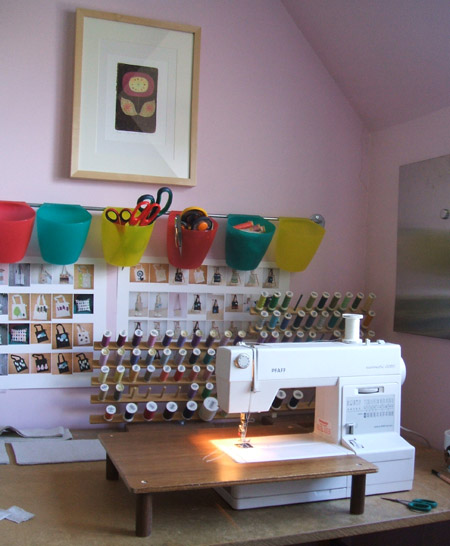 John has now put up my magnetic noticeboard, which has been hanging around for years, and my rail and tubs from Ikea, a much more recent purchase!

I have also got two printouts of some of the bags I have created, this is really useful, because I have been able to refer back to designs, see what I’ve really been happy with, what has worked, and what I have loved making!

The one thing that I would really like to get now would be a larger cutting mat, I have quite a large one already 17″ x 24″ but one that would cover at least one half front to back of the desk would be great, and so useful.

So that is the corner, other stuff, busy busy in the garden this weekend, cut grass, another 3 hours 🙁 also dug up large dead shrub, and put in new shrub from my mum, it won’t flower this year, but at least it should have a head start for next year : )

Very tired, been up since 5.25am, so I will bid you farewell…