I had to write this

I started to write a post about our cats a couple of days ago, but I never finished it, maybe that was a sign, I don’t know.
The past 48 hours seem to have been a whirl, a whirl I never want to get into again. 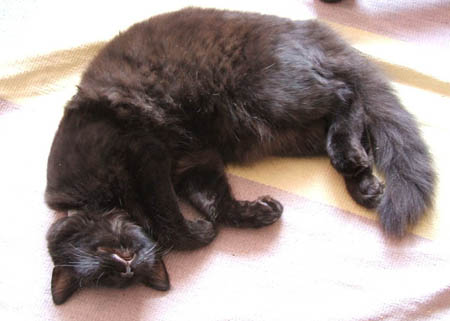 It all started on Tuesday morning for me, but for Baggy it had started earlier.

I had written my post for the giveaway, gone downstairs to sort the boys out, and then I saw him. He had been out all night, it had been cold, and normally he would be waiting to come in…. he hadn’t been.
I was worried, so when I saw him initially I was relieved, I went outside to see him, thinking he had caught a mouse and that was why he was up the slope on the steps, just sitting there.

I got closer and then he made a horrid noise, an unearthly noise that I never want to hear again, I thought there be another cat in the garden, looked round, nothing. so I went to stroke him, and that is when I saw the wound.

The wound across his left side, with his shoulder blade exposed and a great deal more. It was something like that you would see in a film, I felt sick, he looked at me, and he looked sad. How I didn’t scream I don’t know, I guess adrenalin kicked in and I started to almost hyper-ventilate, but I think that was probably me trying not to start crying, I knew I had to get back into the house to get some towels.

I rang my parents in law and told them that I needed them NOW, hung up on them and went for the towels, avoided questions from the boys, got the towels, and then it suddenly hit me that I was not going to be able to do this on my own. Went next door, got our neighnour to come round, and he came into the garden, I knew this meant that I wouldn’t have to look at the wound again, and I was scared of that more than anything else, if I didn’t see it again, maybe it wasn’t there.

Got back to Baggy, he was alert and perky enough to try to avoid being picked up, but we got him, got another towel and wrapped him up.

My parents in law had not arrived, but we needed to take him straight away, so I went round to another neighbour and asked if she could come and sit with the boys, she is 90! But she said that of course she would, so I settled her in, and I drove while Baggy was held by our other neighbour.

I now understand that I had gone into shock, because now looking back at all of this when it was happening it seemed so incredibly quick, and I seemed to see everything in like short cuts, quick edits, like the image was changing rapidly before me.

Got to the local vets, the vet was already operating on another animal, so they wouldn’t be able to even look at Baggy there properly, so the nurse rang the main vets in Winchester and they were told to expect us.

Drove back home, parents in law now at my house, so my father in law stayed with the boys, and my mother in law drove me down to Winchester, I managed to ring John and tell him in between the tears, I guess that probably didn’t help him, but I had to tell him.

The drive down to Winchester takes about 15 to 20 minutes, it felt like we were there in a flash, the sun was out and really bright, and it seemed so unreal, Baggy was on my lap wrapped up in towels, but still totally with it, he had he eyes open and looking at me, no purring, but he was still with me.

As soon as I walked into the vets with him he was taken from me and put on painkillers, antibiotics and fluids.
I was also removed from the main reception as to be honest I had now fallen apart and starting to unravel, not the greatest thing when you have lots of other customers waiting to be seen. We went into a room and waited for the vet.
The vet had a quick look to try and give some sort of diagnosis, and she felt that the shoulder blade had become detached and there was muscle damage around this area. He was very lucky that none of his vital organs had been damaged.

We left him there for him to come out of shock, have an x-ray, and then be operated on.

At this time they felt that he had probably be attacked by a fox or badger, and later they admitted that they had not seen a wound like this before on a cat.
So we went home, collected John from work, my parents in law took the kids back to their house, which thankfully was meant to be happening anyway.

The vets rang and said that he was still in shock, so they had to leave it a bit longer before they would be able to operate, but they would keep me up to date.

They managed to operate on him in the afternoon, not only had his shoulder been detached, it was also fractured they had to stitch some of the muscle to hold it all together as the damage was so bad.
Before they had operated they had taken a X-ray and had to revise their opinion on how he he had been injured. On the X-ray they could see metal fragments, and there were no bones that looked like they had been damaged by a bite.

There was only one way this could have happened, Baggy had been shot.

This totally knocked me for six, and I think I asked the vet to repeat this info at least once.

So our cat had been shot by someone, in the wood, behind our house in our lane, it seemed unreal, and it still does.

I contacted the Police, and made a short statement to them, but I guess little will come of that. I can’t really think of anything else I can about him being shot other than, why? how? who?

Yesterday we went down to Winchester, and I managed to see Baggy stroke him, and make him purr, and I just wanted to stay there with him. I already knew how much he meant to me, but I guess you don’t really realise what you have until it is taken away.
Baggy is my little shadow, and I hope that soon he will be back and continue that : ) 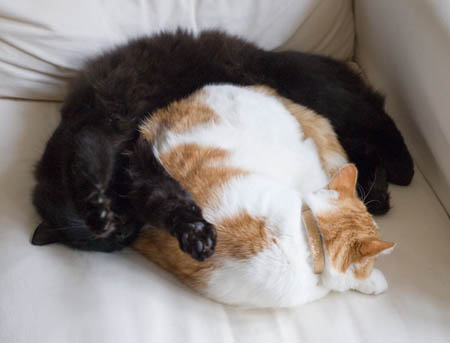 We hope that we will be able to collect him today, I know that when we get him back it is going to be hard work, he is going to need a lot of care and attention, but we hope that soon he will be pretty much back to normal, though we have been warned by the vets that his left leg will be very weak, and he may end up with an odd gait.

I know this has rambled on, but I had to write it, because this blog is my therapy, and the comments left on the giveaway post have really helped to keep me going, you have all shown me how very special people you all are, and that nearly everyone in the world is lovely, there are only a tiny number of idiots.

So thank you all for helping to keep me going.

When I have more news I will let you know.

(these of course are old photos of Baggy, and one is with Richie, who has been looking for him : ( )

« from me to you » three things

Leave a Reply to Maitreya Cancel