He, the youngest, has not produced anything, but he did have a great day at school, which is a miracle after the way he entered school! So a big thank you to the Head, who really helped this morning by taking him off my hands and for a quiet sit down in the library, and letting him do his normal of talking for England, and to the rest of the staff who must have been holding their breath this morning when they heard us coming!

So another GP appointment tomorrow, and lets hope we get a bit further with that!

This morning I did my normal of checking my news and blog feeds, and could not believe when I read about Heath Ledger, what an incredible shock, I think the older you become the more of a shock it is when someone younger than yourself dies, and such a great actor too. I have been looking forward to the new Batman film since it was announced and seeing what he would do with the role, and now, what will happen, will it still be released this year, or what will they do? He was so amazing in Brokeback Mountain, a film which I’m so pleased I saw in the cinema, so I could cry and no one would see me : ) The scene at the end of the film when he goes to Jacks shirt in the closet is so sad and moving, a film that anyone who has had their heart broken should see, a wonderful film. I hope that his family including very young daughter can be left in peace at this terribly sad time.
I also feel awful for Terry Gilliam, as he had cast and shot a months worth of film with Heath Ledger in the starring role in his latest film, does he ever get an easy ride, such a great shame.

I’ll leave you with these, 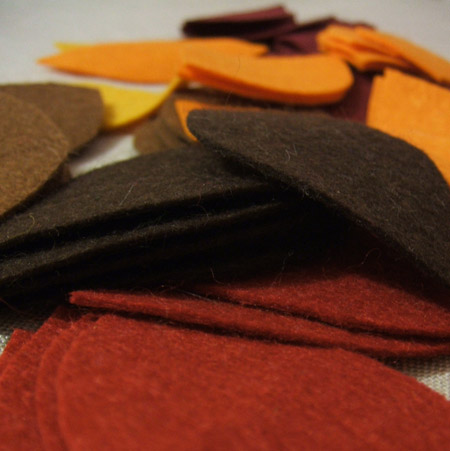 They have now been laid out, re-arranged, removed and arranged again, but still not ready to pin! This should be ready tomorrow, yay!

« no end in sight! » autumn cushion