This past weekend I worked on 3 new pieces of felt.

I laid them all up at the same time, felted the first and then waited another 24 hours before I did the last two. Working like this I was able to get a feeling of how some of the new materials I have been using work, and how best to use them.

I wanted to try out some of the new things I have bought including more experiments with the wool neeps, the uncared fleece, and the dyed alpaca. This is the first piece I worked on, 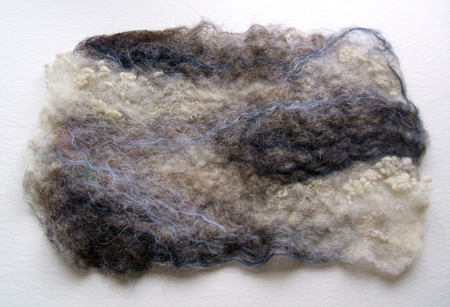 It worked quite well, but the actually piece of felt did not end up in the shape I wanted which was longer and narrower. It also lacks definition in the areas where I wanted it, I think this was due to my being too concerned with overloading the piece with details. So at least from this I learnt, and I stepped back from the other two, and had a think and aÂ  bit of breathing space.

After a day I looked at the last two pieces, and started to re-work them, and adjust the features in them, and add more detail and colour.

This is the second one, 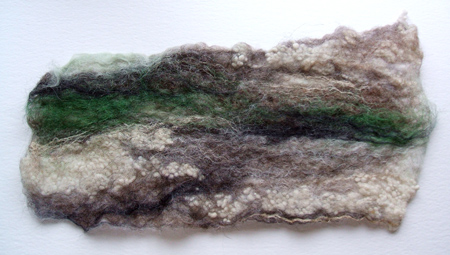 To me this had developed into more of the piece I wanted, like a piece of chalk with moss growing and the weathering effect that you get on chalk.

I really like it, and I want to take some more detailed shots of it, when the lighting is better.

I then turned to my last piece, which again, follows the walls of chalk that I grew up around. This piece, I really re-worked, overlaying a section with new details, particularly the uncarded fleece. I really like the depth to this piece, here it is, 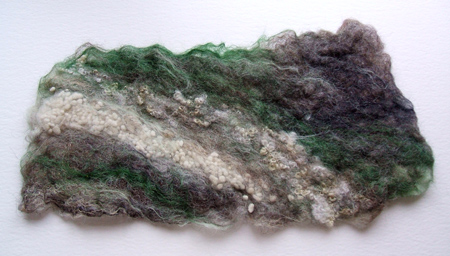 I’m very pleased with the second two, even though the third one is quite colourful, it feels like winter to me 🙂

« I have finally made the mincemeat! » blooming felt!