well I am, a comment was left on my last post, I haven’t authorised it yet, because the person doesn’t have a blog/website so I want to check she is genuine, but she made some interesting points.

The main thrust is/was that I was being judgmental and if I had such a problem with it maybe I should have spoken to them about it. Also that people do drink wine with a meal, and maybe it was a special occasion.

Well lets get on and face these comments head on.

Being judgmental, maybe I was, but I really don’t believe that anyone would have not sat, saw what we saw and not had an opinion, I just voiced mine. My opinion may well be completely wrong, but I’ve said it now and I can’t/won’t take it back.

Speaking to them, to be honest there was no way I would have done this, because I may not be a stunner, but I would rather keep my looks intact, and the man of the couple looked like he could have done me quite alot of damage!! Saying that the woman probably could have done as well!

Drinking wine, I have no problem with this, but it just seemed odd, and it was certainly no special meal, at one point they were both on their mobile phones and ignoring each other : )

I would like to point out, I quite often have people have people stare at me and my boys, make comments loud enough that I can hear, I can clear a shop in 60 seconds when they are both in full effect, so I know what it is like to have people being judgmental about me : )

So if she replies I will make her comment public, and then you can all read and give your opinion as well : ) 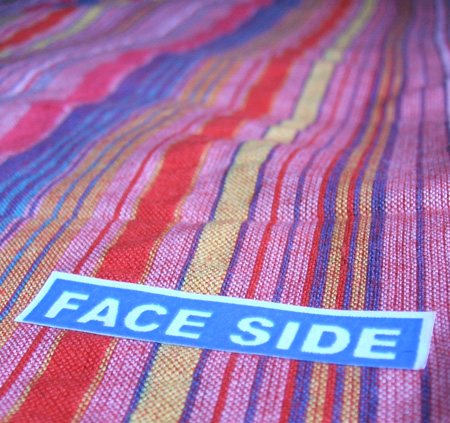 Have you had bought fabric with a sticker on like that? I have checked both sides and they both look identical, very confused!

Anyway enough of that, have a look at this it made me laugh : )