I’ve never been to the Harrods sale, the closet I have been is the first day of the John Lewis New Year clearance in Reading, and that was quite scary, well yesterday I had a similar sort of experience!

Yesterday we went down to Shawford, which is a tiny little village just south of Winchester, and is probably best known as the location of where Victor Meldrew meet his death!
But we were not there for that, we were there for Wingham Wool Work.
Now you may well have heard of them, they sell an incredibly extensive range of products related to spinning, knitting and felting, but they are based in or near Rotherham, so really not practical for me.

So once a year they come a bit closer when they go round the country on weekends, and this year it was Shawford Village Hall, where they had been invited by the Hampshire Guild of Weavers, Spinners and Dyers. Now that all sounds lovely, doesn’t it?
Well when we got there, it was like the hall had been over run by the combination of spinning wheels and ladies with the average age of 60, once I got past all the people spinning, I got to what I wanted, the merino/silk mix, and then the fun started! 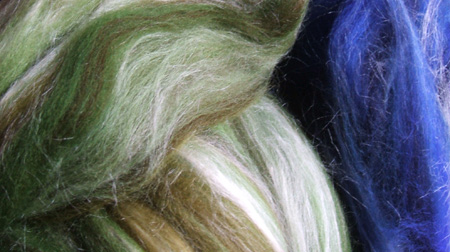 Just getting close to it was almost impossible!

Because of my cold I have had little voice, so I was straining to say ‘excuse me’ constantly, so I was having to squeeze by.
All the wool I wanted was in big bags on the floor, so I was on my knees trying to find everything I wanted with people doing similar but standing up, it wasn’t pleasant!
And the whole thing was like that, too many people, not enough space. It was a bun fight. It was also a really funny atmosphere as well, not that we weren’t wanted there, but it wasn’t as friendly as the one I had been to previously which was a great shame.
Another problem was there was no where near enough room for all the wool etc, and so it was almost impossible at times to actually see anything or to see if it was there! I was trying to find stuff and I just couldn’t see anything, all crammed in!
I guess the other problem with yesterday as I mentioned was that I felt truly awful, and if it had been anything else I simply would not have bothered, but it is a once a year chance to ‘see’ what they have got and stock up. Their stock is lovely, but like so many things it is so much easier to make choices when the stuff is in front of you. So now stocked up with enough to make corsages for another year, and some more of the lovely alpaca.

So today, well, I need to sort out my room, as I still haven’t put all my stuff away after doing the course, and then this afternoon I have speedway, the last one ever potentially, maybe I’ll tell you more about that tomorrow : )