I think my quilt making is very much in the contemporary bracket! I don’t think I have the time, the patience, or probably worst, the inclination to produce a beautiful traditional quilt. I love the idea, but I don’t think I have the stomach to make one myself! It isn’t the size, because I would feel quite confident in that, it is the perfection, the precise nature of it, and as seen with the nuno felting, I don’t like to think I have failed!

So this week we start work on the quilting on the course I’m running, I have shown you one already and thanks for all the lovely comments on that, but I wanted to make at least another one, a practical item. 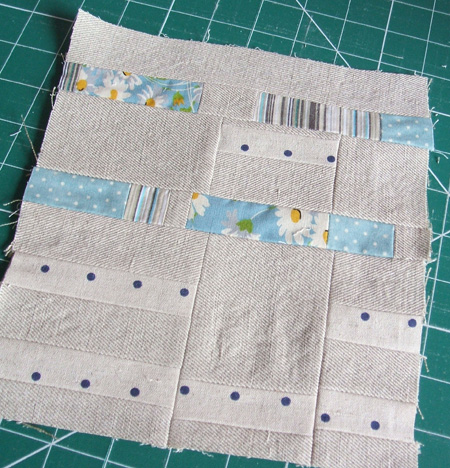 I have gone for a very subtle and understated colour scheme, and pattern, as I wanted to try out doing more stitching. 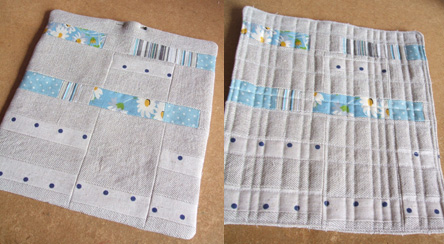 Also to keep it quicker and easier for me, this time it is not bound, I simply turned it inside out. I really like this effect on this one, I think it looks understated, and practical.
So this is how the last one finished, I didn’t wash that one, as it is a wallhanging, and looks great as it is, but I wanted this to have that lovely ‘lived in’ feeling, and so into the wash it went. 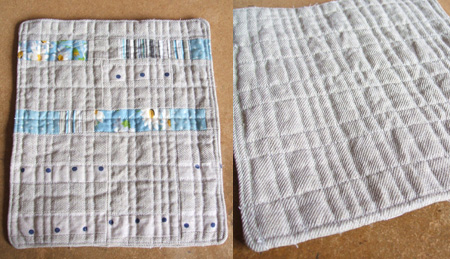 It looks nice, and I’m confident it could be quite successfully in the kitchen as a pot-rest, or something similar. It is mainly a lovely thick linen, so I think it would stand up to the task well, what do you think?

I need to make some more pieces up a-la Blue Peter, to show the stages, I could use photos, but having actual pieces it is much easier to explain things, and to answer questions, also you can pick them up, have a fiddle and go from there.

Unfortunately I have not stocked up the shop recently : (
I have ten bags half made, and due to a disagreement over table fees (another story), I might only be doing the Handm@de fair in Oxford now, so I don’t really if I should sit on my stock, or flood the shop, hmmmmmmm.