a sad but positive day

when I was little I wanted to make things, and I think I made quite a lot of stuff, this was inspired by the fact that my dad worked with his hands and made wooden boats, and when I say that I mean this sort of boat.

I was also inspired by the other things around me, including a couple of people on television, and today the second one of those died as well : (

Tony Hart was amazing, he made me feel that I could draw, I could make things, it was possible, so much so that I decided that I could get a picture of mine on Take Hart, and I did! I don’t know where that picture is, my mum might still have it, or maybe it is in a box here somewhere, but ‘Billy the Boxer’ made it, he reached the Gallery!
And to commemorate my achievement I received this, 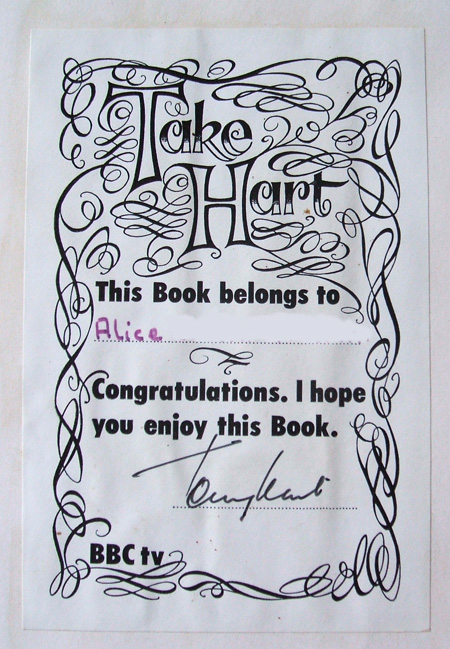 This bookplate is really signed by him, in pen, would probably be laser printed now. But I won it, he signed it, and I still have the book, well Edward does, but it’s there.
Still there to remind me that sometimes things you dream about can come true : ) Unfortunately, my other hero died when I was only 18, and the dream I had of working for him died at that moment too.

Positives for today, well the boys bedroom was tackled, a job I have been putting off, it is so soul destroyed to tidy something, get everything organised, and then have them destroy in 10 minutes! But, we have almost done it! Started yesterday, and it will be finished tomorrow, hurrah!

and those are now in the shop, as are the cushions, so some good results in the end!

Leave a Reply to Jo Cancel