the weird world of eBay

I buy many of my supplies from eBay, these range from beads and thread to balloons and packing envelopes. This is a tale of confusion and to be honest a warning to anyone who ever uses it.

Recently I wanted to get some silk ribbon for some little things I’m making, I found some, checked their feedback, some negative, but a long long time ago, and so went for it. 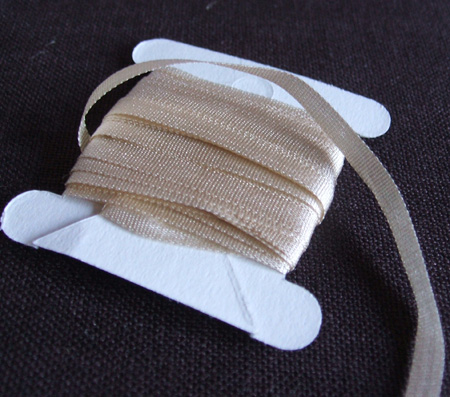 I ordered it on the Monday (13th), on the Thursday (16th) I received this ‘automated reply’;

Thank you for placing your order with ********* *****. We are pleased to
confirm that your order has now been passed to dispatch and will be collected
shortly:

Your parcel has an electronically tracked barcode in the franking strip,
so you may be required to give a signature upon receipt:

so that was cool, I thought it should be with me by Saturday : )

The following Monday (20th) nothing had appeared, so I mailed the seller in the morning and asked when I could expect it to arrive, I received the following reply;

Hi Alice it was collected by royal mail on saturday morning so it should be with you early this week, Many thanks Jo

So that was fine, there had been a delay, fair enough, until I received the next e-mail from the seller later that evening;

Hi Alice, I am sending you a replacement parcel as it may have gone astray in the post. Your new parcel will be posted in the morning (Tuesday). many thanks Joanne

I thought this was a little odd, to receive an e-mail like this at almost 10pm, so I asked;

Could explain as to the change of heart? 11 am today, it would
be here early this week, and now you think it has gone astray?

If you could let me know I would appreciate it.

I felt this was fair enough, as what could have changed, it also made me suspect that she had never sent it in the first place : (

Hi Alice. I have had reports tonight of five of my parcels not arriving so I am replacing them to be on the safe side. all the best, Jo

Ok, give her the benefit of the doubt, it said on the automated thing I got at the start that she tracks all her items, always a good idea, so I went to bed happy that my ribbon would finally arrive on Wednesday.

On Tuesday I sent her another mail because of the tracking, maybe it wasn’t lost and just delayed?

Looking back at all the communications from you, I was reminded
by the one I received on 16/10, which states;

‘Your parcel has an electronically tracked barcode in the franking
strip,
so you may be required to give a signature upon receipt’

So surely if this is the case you should be able to track all these
missing parcels and see where they are.

Also to let you know it has still not arrived.

I thought that was fair enough, and I knew she would probably come back with saying yes, they had been tracked, and no they had been lost, etc etc.

A little later I got this;

Hi Alice, yes the parcel did have tag tracking which I can confirm shows the parcel has not yet been delivered so I have sent you a replacement out today. The other may or may not turn up, my experience is if they havent turned up after a week, they usually don’t turn up at all. Joanne

So yes they had gone missing, but hang on, this reply was from the right person, but the wrong account? Weird, I’ve never bought anything from this person, but it was about the ribbon, so I clicked on the link for that account, and there it was, totally different, ok, fair enough she had two accounts, clicked on the feedback, and whay-hay, the account that I had bought my ribbon from, had left feedback on this one!

So here was someone running two accounts and leaving feedback from one to the other! So I wasn’t very happy, ok the ribbon was not expensive, but that isn’t the point, the point was I felt I was being lied to!

On Wednesday the ribbon arrived, the postage wasn’t tracked, it was a Paypal printed postage thing, so I guess that it how the first one was sent as well : (

So I had to leave feedback. I have never left bad feedback for anyone, let alone negative, but I felt I had to do it, so I left the following;

Good item, delivery did not match that, seller using two account to communicate!

I couldn’t argue about the quality of the goods, they were fine, it was the lying I can’t get on with, she replied to this with;

complaine item never arrived? I REPLACED IT, STILL SHE COMPLAINS AND LEAVES NEG

Don’t think she really got the point!

Now of course sellers can no longer leave negative feedback, so I got this instead!

you have to laugh at the sheer madness of it!

I’m not going to say who the seller is, but if you want to know because you are thinking of buying 4mm wide silk ribbon, let me know and I’ll tell you!
But to be honest, you may actually not be able to buy from her again, because more stuff has happened!

After speaking to John about all the problems, and saying that I couldn’t find anywhere on eBay to complain about the two accounts etc, he found me the right place, and I complained just about that, nothing else.

Got up this morning to two e-mails, the first sent by the seller late last night;

many thanks for your negative which to be honest is a bit of a cheek considering I did replace your so called ‘lost’ item for you. I took your word for it that it had not been received but maybe you did receive it and just wanted another freebie. Anyway hope it brings you GREAT joy, YOU VERY SAD PERSON, GET A LIFE!!!!

Also the item was ‘tracked’ so surely she knew I had not received it!
Still don’t think she gets the point!

Then early this morning (5am!) I get a mail from eBay saying that they are removing the feedback she has left for me! And yes, it has gone, also the sellers shop is no longer there either, so my confidence in eBay is restored.

But I would say that try to make sure you do have a good look at someones feedback, even if it is positive, because people put stuff in the comments even if they do not make it neutral or negative.

ps the ribbon is nice though : )

(edit – I would just like to add that the seller has her own website shop, and as far as I’m aware that is still trading.
So to the person who left a snide comment earlier, if she has gone out of business, maybe she should have look at her business practices first)