I feel like I need to explain stuff, where I have been and what has been happening, but why would I do that? I mean, this is my blog, and I don’t need to explain myself to anyone, but I do, because writing this helps, getting stuff into writing moves it from my brain and hopefully makes it a bit neater and gives the rest of my brain space to move!

Hey what a great start! If I have not freaked you out or bored you, I shall begin….. To tempt you onwards, there is a photo near the end!

I think around the 20th of April I was really moaning about William and how awful he was being and how I took him to the doctors, well I did, and he performed as I would have expected, into everything, wanted to fiddle, wouldn’t shut up, and oh god it was awful, so bad that the doctor suggested that maybe he has ADHD, joy!

Well I don’t think he has ADHD, maybe some elements, but as like so many of these things, everyone exhibits some symptoms and to be honest it was an easy answer to a worn down mother and manic child!

From this we went back to school, and the lunacy continued, to a point that two weeks ago he was temporarily excluded. Now I know people from his school read this blog so I will not write everything I feel about the situations that lead to this event, however, I feel that he exhibited behaviour that we have seen at home, but he did it in school more extremely which caused the ‘incident’. I could go on about the problems of excluding a child, but really it is not worth it : (

This happened the Thursday before the Bank Holiday weekend, so he had 5 days away from school, and shockingly he did want to go back, and he has been pretty good I think, but I don’t really know if he is getting an education as such at the moment, and this is no disrespect to the school, but that element does concern me. He is pig headed and stubborn and he knows that there is only so much school can do : (

So since that break he has been pretty sorted, but I knew we had an observation looming from the Educational Psychologist and the Schools Paediatrician, which was on Wednesday. I wasn’t worried until the night before, and then I guess I started to think about it more and maybe too much, but actually it was good and really ok. They watched him for 90 minutes and then I had a meeting with them to discuss what they had seen, their opinions and feedback from me as the parent.

They want to him to have a Statutory Assessment which may well and hopefully (I think) lead to a Statement of Special Needs, which is what Edward already has, and has made a huge difference for his education. But there so far is no diagnosis, no label for him…. So we go on the waiting list to see the Clinical Psychologist and go from there.

So all of this had made me feel a bit mentally frazzled… But there are people out there, with so much more on their plate, that really I need to stop moaning and just get on with it!

Also running over this period of time I was approached by an agency representing a well known high quality card company if I could come up with some designs to submit, yay, you may say, but instead I was plunged into total creative block : ( I was limited by their requirements in a way I thought I could deal with and basically I just failed, my brain with everything else just seized up and produced stuff that I’m simply not proud of, and the way I work is that I’ve got to love making it and would potentially love to use it, otherwise why bother!

But yesterday in the last throw of the dice my creative mojo returned, and I came up with some designs I really like, but they didn’t, but now I can show you a peek : ) 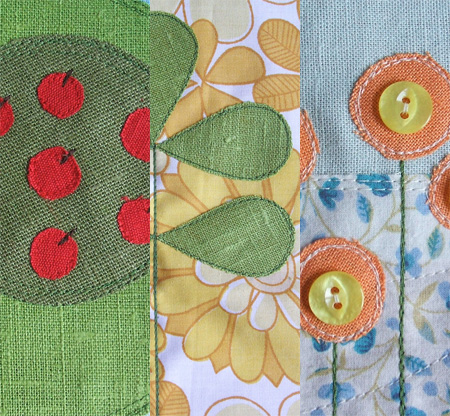 The three bits are actually from two bags, I’m sure you can guess which bits go together!

These will be turned into bags over the next few days, and I feel relieved in a way, I’m designing and making things for me and you, and you have all been so lovely as always that I can’t wait to share these with you very soon!

Thanks for reading the amazing amount of waffle above, and thank you for all your comments on the two previous posts, they make me feel all warm and fuzzy inside!